In January 1995, Ramana Athreya, an astronomer and ecologist, was birding at Eaglenest Wildlife Sanctuary in Arunachal Pradesh, Northeast India. He had brief views of a pair of liocichlas that he could not recognise. It was not until 10 years later that he got a better sighting, when the birds were tentatively identified as Emei Shan or Grey-faced Liocichla Liocichla omeiensis, an endemic of southern Sichuan, China. After further observations a year later, it became obvious that there were several differences in plumage and song.

In May 2006, a bird was mist-netted and, based on this individual, described as a new species and named Bugun Liocichla Liocichla bugunorum, to acknowledge the support of the Bugun tribe for the Eaglenest Biodiversity Project and associated conservation initiatives. The Government of India Department of Posts even released a commemorative stamp!

To date, barring a few isolated sightings, all observations of Bugun Liocichla have been in the near vicinity of Lama Camp, in degraded habitat on disturbed shrubby hillsides, an area notified in 2017 as the Singchung Bugun Village Community Reserve. It is therefore surprising that no further populations have been discovered, as this habitat is not pristine nor unusual.

Just 14 birds were known in 2006 and, despite more exploration here and in some of the surrounding areas of western Arunachal Pradesh, there is little evidence of a larger population. A maximum of 22 birds has been recorded in the 2 sq km area between Lama Camp and nearby Alubari, with the very few sightings elsewhere suspected to be dispersing birds (Umesh Srinivasan, pers. comm.). It is clearly extremely rare, and considered critically endangered.

It is remarkable how such a colourful, and not especially shy, bird, could remain unknown until so recently.

They are a medium-sized laughingthrush, greyish-green in colour (greyer above, brighter below) with a black cap, yellow lores, and a yellow spot behind the eye. The wing is spectacularly coloured: outer greater coverts are bright yellow, inners a coppery shade, flight feathers are black, tipped white, with primaries having bright yellow outer webs and secondaries bright red, forming a large red patch on the closed wing. The tail is black above and tipped red, solidly red below, and undertail coverts black and yellow-tipped.

The female has duller wings, yellow tips to the tail, and lacks most of the red of the undertail.

The song is a distinctive simple series of typically five, slightly descending, mellow notes, and often the first indication of the bird’s presence.

Bugun Liocichlas frequently associate with other species, especially Rusty-fronted Barwings, and Blue-winged and Chestnut-crowned Laughingthrushes, and can sometimes be seen in small flocks until they pair up through April and May. They do sometimes respond to playback, but with so few birds in such a small area this can easily be overdone; as well as potentially being harmful to the birds, it loses its effectiveness anyway because of this, so should be kept to an absolute minimum. The species does not seem especially shy, so with patience most people do get good views.

On his first trip here in 2007, Mike and a group spent 17 hours specifically looking for the Bugun Liocichla, only to finally connect one minute before the cut-off time for the long drive direct to Guwahati airport and flights home! Thankfully, a lot more is known about it now: it is still difficult to see, but most birders willing to put in some effort do manage to see it. 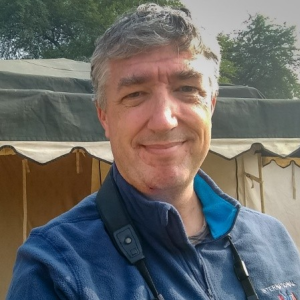 British birder and now only occasional IT Consultant. Owner of Bubo Birding, BUBO Listing, and fascinated with birds, data about birds, amazing birding places in India, and sharing all of this with people new to the country.