Dusky Eagle Owl is one of the larger species of owls found in India. It is distributed across much of North India and Pakistan, all the way along the Gangetic plains, up to Eastern India, parts of the Northern Eastern Ghats (Odisha), Telangana and Central India. It is also recorded from parts of North-east India, with recently documented breeding populations from Sivasagar and Golaghat (Kaziranga National Park). Interestingly there are no recent records from the Coromandel Coast, from where the species was first described and how its scientific name was derived. Outside of India, it is found in Bangladesh, Pakistan, China, Myanmar, Thailand and Malaysia.

Dusky Eagle Owl is a large owl, up to 20% bigger than a Large-billed Crow. It is overall a greyish-brown with light streaking on the underside, and with buffy-white spots on the wings. It has a light facial disk with a dark brown outline, prominent ear tufts, and a deep yellow iris. The subspecies klossii, found in Myanmar and Thailand, is much darker in plumage.

Dusky Eagle Owl is mostly found in open habitats at low altitudes, usually near waterbodies with extensive woodlands. It is undoubtedly a star attraction at Keoladeo National Park, the best place in India to see it.

During my first visit to Keoladeo Ghana, I had plenty of opportunities to observe this bird. Although it was difficult to actually find it, I eventually came across a nesting pair on a tree overlooking one of the many wetlands—a female with two chicks in a fairly big and open nest. Maintaining our distance, we watched the bird and its inquisitive young ones watching us! It’s funny to notice the sunken eye shape that these owls have—as if they are perennially sleepy!

My most memorable experience of Dusky Eagle Owl was actually the following night. Courtesy of my engagement with the Wildlife Institute of India, I got the opportunity to go around the park at night under the supervision of the forest department. Standing at a watchtower, we heard a duet of the owls in the cold night—while one called from one end of the wetland, the other owl responded from the other end. No sooner did we climb down from the watchtower did we spot the owl perched on a tree right next to us!

Dusky Eagle Owls generally occur in pairs, often inhabiting the same grove year after year (Ali and Ripley). They are not entirely nocturnal and can often be found active even during daytime, especially in dull weather. They usually nest in December and January, often in the fork of a large tree overlooking a wetland—exactly how I saw them at Bharatpur. Ali and Ripley also mention that they often appropriate the nests of eagles, kites and vultures, lining them with new, green leaves. They usually lay one or two eggs. Unusually they have been recorded nesting on cliffs in the Chambal River gorge (also see image).

They eat a wide variety of food, including birds (such as crows, pigeons, doves, parakeets, and coucals), small mammals (rodents, hares, squirrels, even porcupines), insects, reptiles and amphibians. They also take birds’ eggs.

Dusky Eagle Owl has a large range and apparently stable population, hence is considered “least concern” by IUCN. However, loss of habitat, and hunting for religious purposes, may pose threats; ecological studies on their population and other aspects of natural history might lead to reassessment of their conservation status. In particular, the Southeast Asian subspecies is range restricted and little known, and there is also not much information available about the species status in China and Myanmar. 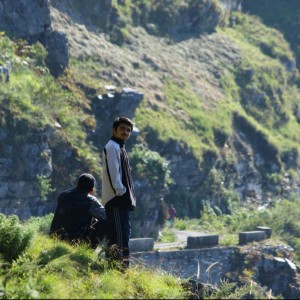