Ibisbill Ibidorhyncha struthersii is a charismatic and uncommon wader seen in the Himalayas and foothills in India. It has a wide geographic distribution from Kazakhstan to China, but its habitat is limited to river valleys in major mountain systems in Asia. The Western-most distribution limit is in the Pamir-Alai mountains in Kyrgyzstan, and to the east it is seen up to the Qinghai–Tibet Plateau in China. The high-altitude residing Ibisbill winters mainly in the Himalayan foothills.

In India, Ibisbill has been reported from the states (and union territories) of Jammu and Kashmir, Ladakh, Himachal Pradesh, Uttarakhand, Assam, Arunachal Pradesh and Sikkim. Jim Corbett National Park (Tiger Reserve) is one of the best places to see it.

At c40cm long, the Ibisbill is clearly larger than a River Lapwing, with which it typically shares the same wintering habitat. It has a downcurved bill resembling that of ibises, hence the name, although is much smaller. Ibisbill is monotypic—the only member of its family (Ibidorhynchidae)—and thus a key target for birders. It is most closely related to oystercatchers and stilts.

The peculiar red to bright crimson coloured beak with contrasting body plumage makes the Ibisbill an attractive bird to watch. The face and crown are black with a thin white outline, and the head is grey in colour. The grey patch continues till the breast. A thin strip of white followed by a thick black band demarcates the white abdomen and the grey neck and breast. The plumage on the back is brownish and again contrasts with the grey head and white underparts.

Breeding adults have brighter plumage compared to non-breeding individuals and juveniles. The legs are pale yellow to red in colour and, when in flight, do not extend beyond the tail tip.

The Ibisbill is mostly seen in shallow and wide river beds and streams that are devoid of any woody vegetation. The bird is found at an altitude ranging between 180–4,000m. They exhibit altitudinal migration, breeding in the higher reaches of the mountains and descending to lower elevations during winters. They are largely aquatic in foraging, probing for larvae and snails, and pecking at fish in the river. Fish, crustaceans and larvae of various flies comprise a large portion of their diet. They are known for their raking behaviour—moving their bill sideways through small pebbles to disturb insects and other invertebrates, and pecking on them as they surface. They move their head repeatedly up and down while foraging, and when disturbance or a threat is sensed.

A study in Southwest China[1] reported that they spent nearly 50% of their time foraging, and over 30% resting.

Ibisbills are mostly solitary while foraging, rarely being seen in pairs or small groups. They are monogamous (i.e. they mate for life) and territorial. They breed between March and May, the nest formed by making a depression in the sandy patch of the river bed or bank. The female lays 3–4 eggs and both parents take part in incubating the eggs. They defend their territories through aerial displays. The chicks start flying about 40–50 days after hatching, and young remain with the adults until the start of the winter.

Ibisbills prefer areas with sparse human presence and are very sensitive to disturbance. Their geographic distribution is restricted to limited sites where human footprint is low. The bird is threatened locally as its habitat requirements (river banks, shallow river beds, sandy shingle for nesting) overlap with human activities such as sand-mining, water sports, and tourism. At times, they are found foraging in polluted rivers.

Due to the overall large distribution range, the species is officially listed as Least Concern in the IUCN Red List, but safeguarding local populations remains a challenge throughout the majority of its range.

The River Kosi in Corbett is one of the wintering grounds of Ibisbill, and probably responsible for more birdwatchers’ sightings than any other location! The vast river bed dotted with smooth boulders and skirted with short grass along the banks, demands for sharp eyes to spot the bird. The white belly and brownish back camouflages remarkably well with the stones in the river bed. In Corbett, Ibisbills can be seen throughout the winter months, typically arriving in late October and remaining until March. One of the best places to sight them is at Garjiya Devi, and there are regular sightings from Dhikala and Bijrani too. It takes some patience to wait quietly by the river and scan for the bird, at times requiring multiple visits too. During my visit to Corbett in early 2019, I didn’t have the fortune to find one—that gives me a good reason to plan another trip to Corbett!

Being that Ibisbill is the only member of its family, it is a key target for birders, and this is one of the best places to see them anywhere in the world, so hopefully you will have more luck with your quest…!

I would like to thank Rohan Menzies of Nature Conservation Foundation for sharing insights and his observations of Ibisbill from his research work.

Do consider our Classic North India tour for a great chance to find Ibisbill at Corbett, or head to the high altitude of Ladakh for an even better chance on their breeding grounds. 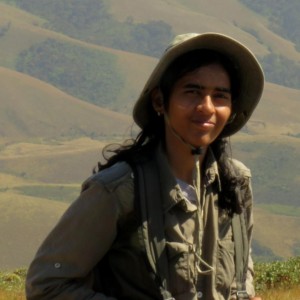 Pooja is a wildlife biologist by training and has been studying the ecology of hornbills since 2015. She is a researcher at CCMB Hyderabad. When not watching hornbills, she enjoys being in the forest, (e)Birding, making sonobe models and writing about nature.