Birds and Birding in India 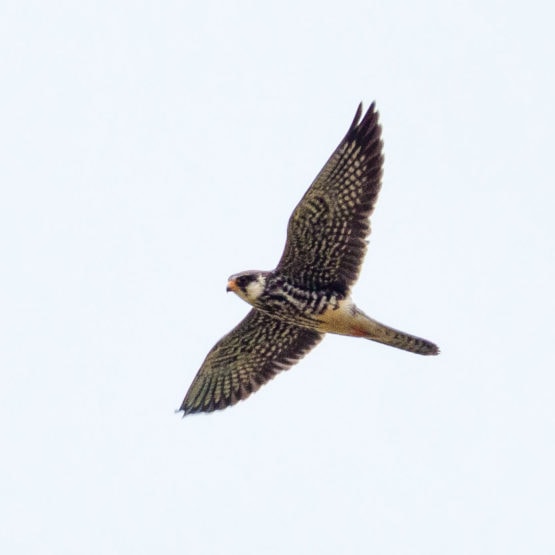 Amur Falcons have the most spectacular congregations and migration of any raptor, with a million birds staging in Nagaland on their way to southern Africa, a round trip journey of more than 20,000 km each year. In 2012, it was realised that hunting of these birds was happening on a staggering, unprecedented scale—up to 140,000 of these birds were hunted in a single season.

Thankfully, Pangti village in Nagaland is also home to the story of a remarkable community conservation and education project. 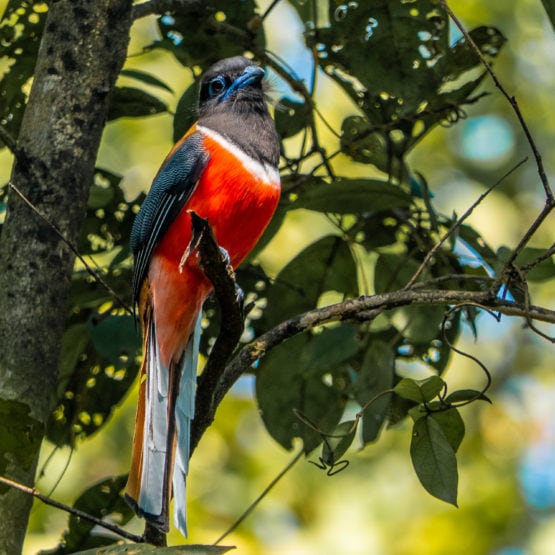 Goa has fantastic variety for birding. As well as the coastal wetlands, Western Ghats forests and inland marshes, the rocky laterite plateau provides a habitat for open-country and dry land birds. With beautiful scenery, friendly people, relaxing beaches, delicious seafood, and a great selection of bars and restaurants, it is ideal for any level of birder with or without non-birding family!

This short tour, staying at Nature’s Nest, in the Western Ghats on the periphery of Bhagwan Mahavir Wildlife Sanctuary and Mollem National Park, followed by a few nights on the coast, with birding at sites including Carambolim Lake, Morjim Beach, and Socorro Plateau, produced a fine 226 species. Read the trip report to hear more about the Malabar Trogon, Sri Lanka Frogmouth, Blue-eared Kingfisher, Great Hornbill, White-bellied Sea Eagle, Malabar Lark, Grey-necked Bunting, and much more. 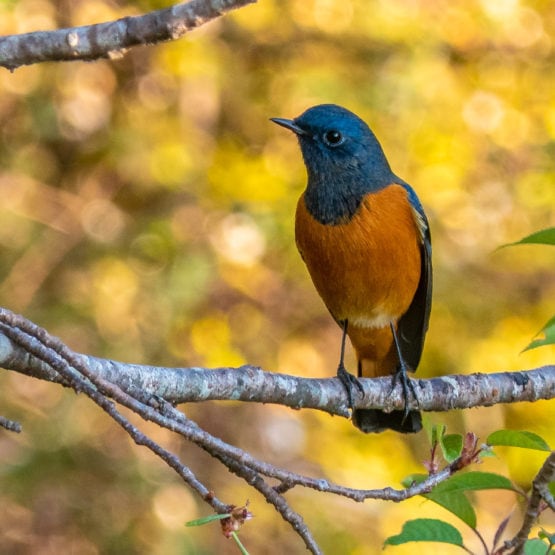 A short escape from lockdown with a tour to the best of Uttarakhand birding sites, including the scenic splendour of the Himalayas. Driving from Delhi, we spent three nights at India’s first and foremost birding lodge, Jungle Lore at Pangot in the Himalayan foothills. We then spent one night at Sattal, before heading back down into the plains and two nights on the periphery of Corbett Tiger Reserve, at Falcon Nest Resort. 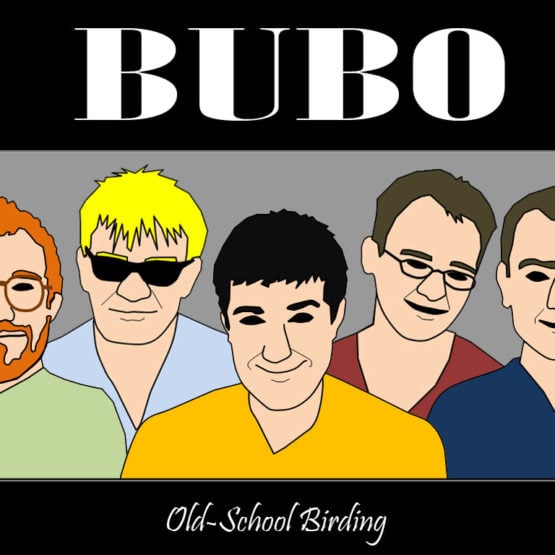 Bubo is the genus for Eagle Owls, with Eurasian Eagle Owl in particular an awe-inspiring bird. BUBO originated with a small group of student birders at Bristol University in the early 1990s, who spent their weekends bussing and hitch-hiking to sites such as Chew Valley Lake. After a mad weekend trip to Belgium, where we saw a fabulous Eurasian Eagle Owl, Bristol University Birding Organisation was born.

BUBO Listing is based on the premise that birders’ lists should be open to view by anyone. It is the fun side of bird recording, e.g. year list challenges with fellow birders for your local patch, lockdown listing, green listing, showing an up to date listing badge on your own blog, seeing what your biggest “blocker” is, what are your easiest target species, which bird families are you missing, and even which birds you’ve seen on television! 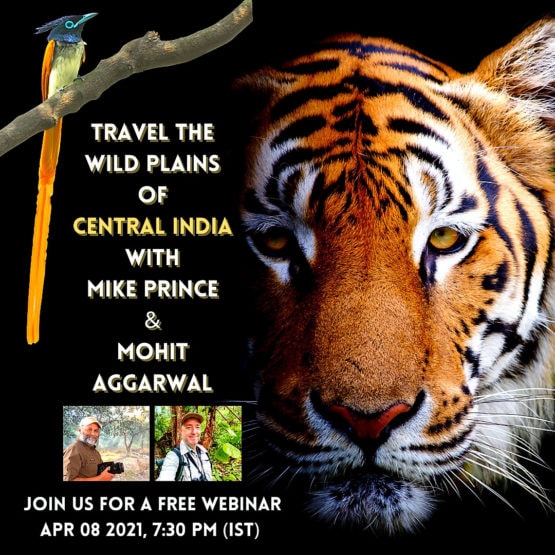 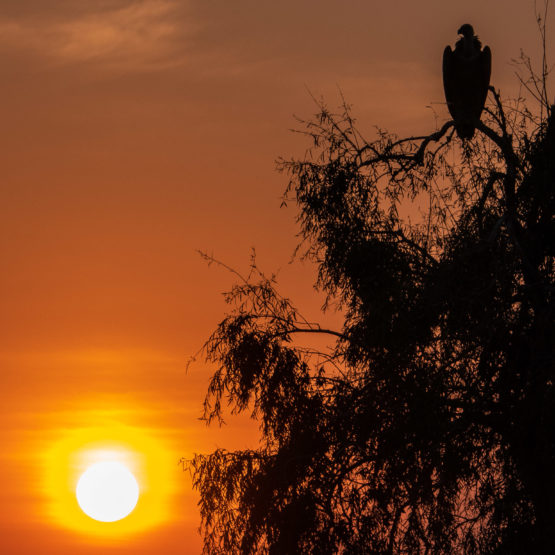 Another “Looking up from lockdown“ tour to top Indian birding destinations, taking advantage of a relaxation in COVID-19 restrictions, this time visiting two of the best desert birding sites in Rajasthan. Overall birding was as usual fantastic, and we definitely felt safer being in outside environments in remote and uncrowded places, than stuck at home in towns and cities hardly getting out!

Driving from Delhi, we spent two nights near Tal Chhapar Wildlife Sanctuary, one at Bikaner to visit Jorbeer Vulture Conservation Reserve, and three at Sam in the Thar Desert for the Desert National Park. We drove back, and spent a further night in Pushkar.

Altogether we saw 209 species in just over a week, including travel days. Rajasthan has spectacular birding and, more than just the species numbers, the birding experiences were wonderful. It’s hard to single out a highlight, but to end up seeing 10 different Great Indian Bustards—almost 10% of the remaining global population—was up there of course. 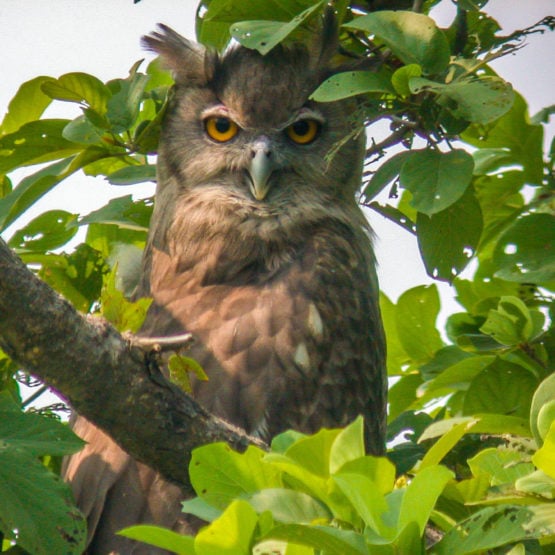 Dusky Eagle Owl is one of the larger species of owls found in India. It is distributed across much of North India and Pakistan.

Dusky Eagle Owl is mostly found in open habitats at low altitudes, usually near waterbodies with extensive woodlands. It is undoubtedly a star attraction at Keoladeo National Park, the best place in India to see it. 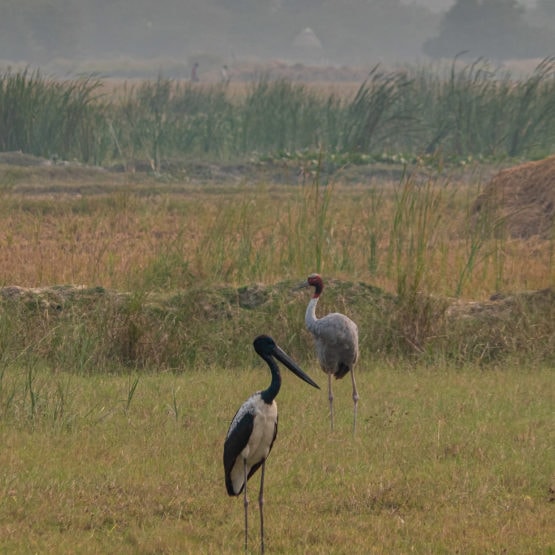 This was the first of a number of short “Looking up from lockdown” tours to top Indian birding destinations, taking advantage of a relaxation in COVID-19 restrictions. Itineraries were designed to be easy-paced, minimising travel, and using established bases that we knew to be implementing sensible health precautions. Overall birding was as usual fantastic, and we definitely felt safer being in outside environments in remote and uncrowded places, than stuck at home in towns and cities hardly getting out!

Driving from Delhi, we spent three nights at the famous Keoladeo Ghana National Park at Bharatpur, followed by one at the Chambal Safari Lodge, convenient for birding the Chambal River nearby. As well as these well-known sites, we took the opportunity to visit some lesser-known sites in the area—including seeing an amazing 96 species in our 2-hour afternoon visit to Ramsagar Wildlife Sanctuary, which had no previous records at all in eBird!

Altogether we saw 207 species in just 5 days, including travel days. The overall diversity and quality of birding in this area that leaves a lasting memory. Other than wildlife, the in-the-field lunches were a definite highlight! This tour was intended to be just a 5-day trip, and the itinerary was perfect for that. 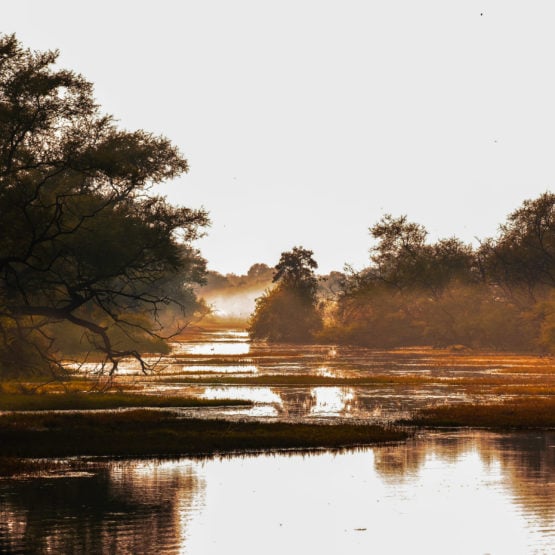 Keoladeo Ghana National Park is located in the northern state of Rajasthan in India. Initially called the Bharatpur Bird Sanctuary (because of its location), the place soon received the credit of a national park in 1982. It further attained the tag of UNESCO World Heritage Site in 1985, and is also a Ramsar site.

Read more about this must-visit birding location, and how to get the best out of a visit. 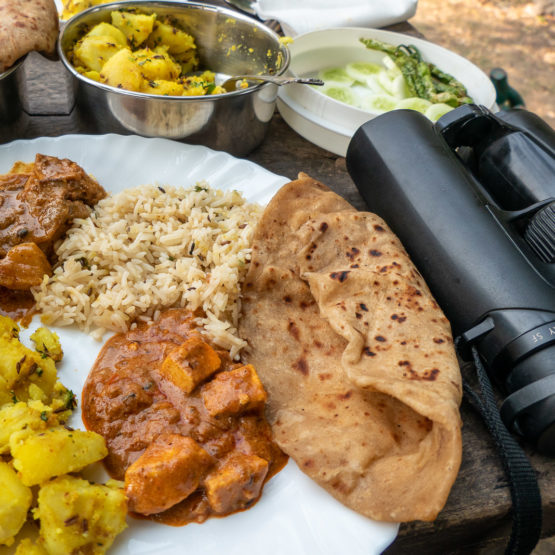 The social, economic and health costs of the COVID-19 lockdown are devastating, especially to the poor, and we believe it is important to move slowly to some form of normality. After careful consideration following our complete shutdown, we have recently decided to run some limited birding tours, with certain common sense precautions, in terms of physical distancing, hand hygiene, and respiratory hygiene. 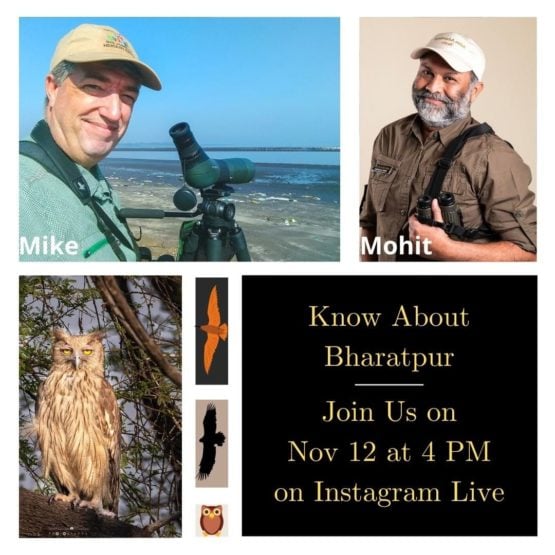 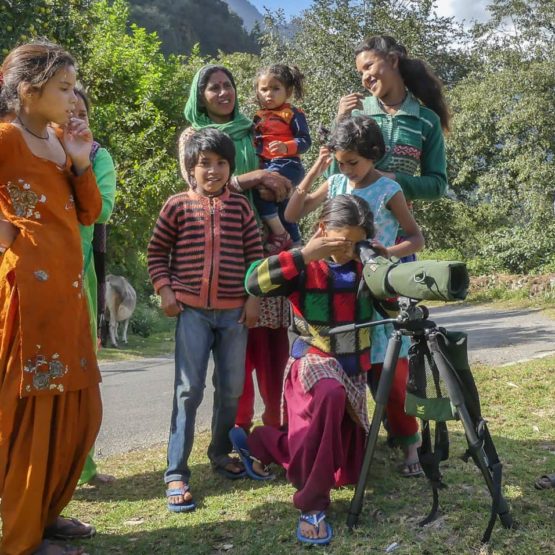 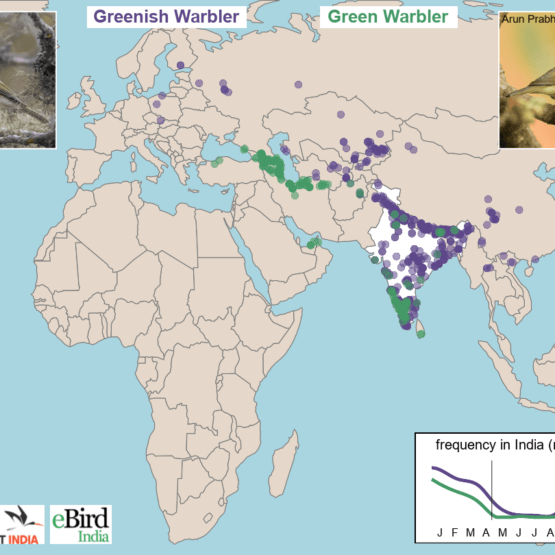 The what, why, how, when and where of Bird Migration in India: a webinar by Mike for Deccan Birders. This covers a background to bird migration, as well as analysis of eBird data for certain migratory species in India to determine any patterns. 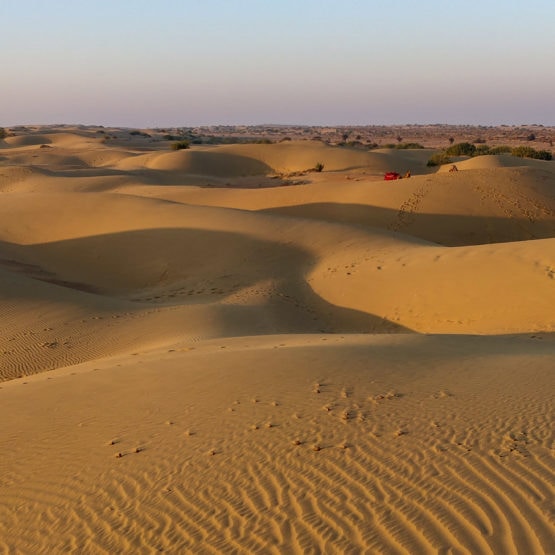 Desert National Park (DNP) is in the Thar Desert in Western Rajasthan, very close to the border with Pakistan. One of the largest and the richest arid region in India, it supports a long list of species, including several difficult to find elsewhere.

Read more about this unique area, its birds and mammals, and how to get the best out of a visit. 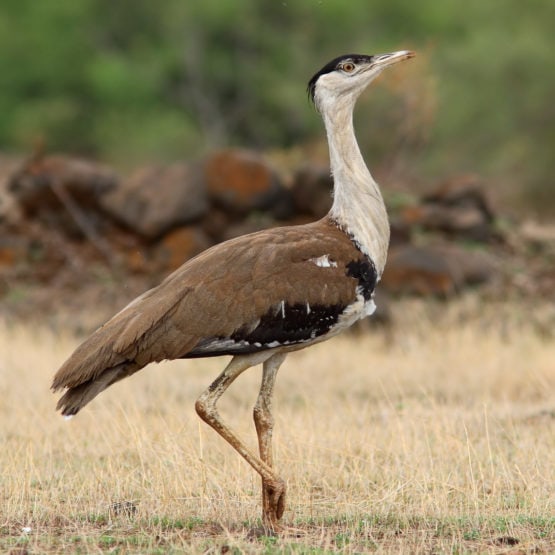 Great Indian Bustard Ardeotis nigriceps is one of India’s rarest birds, in grave danger of extinction. Found mostly in Rajasthan’s Desert National Park, its total population is only about 150 birds.

Their population is threatened by development of grasslands, hunting, strikes with power lines, and free-ranging dogs. A conservation breeding centre has been recently set up. 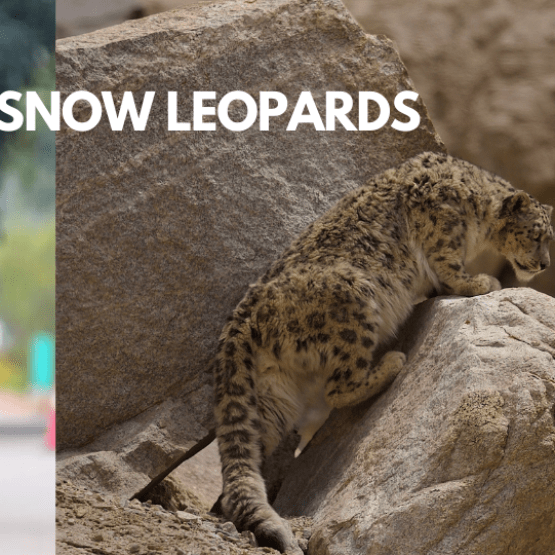 Run 24 for Snow Leopards. Whilst Covid-19 has stopped us from watching Snow Leopards in Hemis National Park as planned, we will instead support Charu Mishra, Executive Director of the Snow Leopard Trust, as he runs for 24 hours consecutively to raise awareness for endangered species and ecosystems. 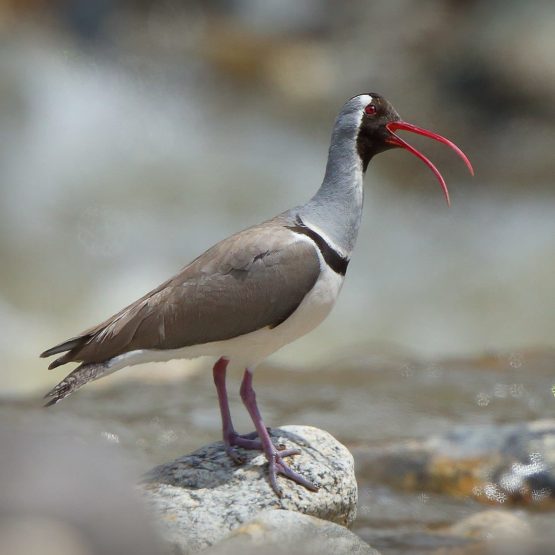 Ibisbill (Ibidorhyncha struthersii is a charismatic and uncommon wader seen in the Himalayas and foothills in India. It is monotypic—the only member of its family (Ibidorhynchidae)—and thus a key target for birders. Jim Corbett National Park is one of the best places to see it. 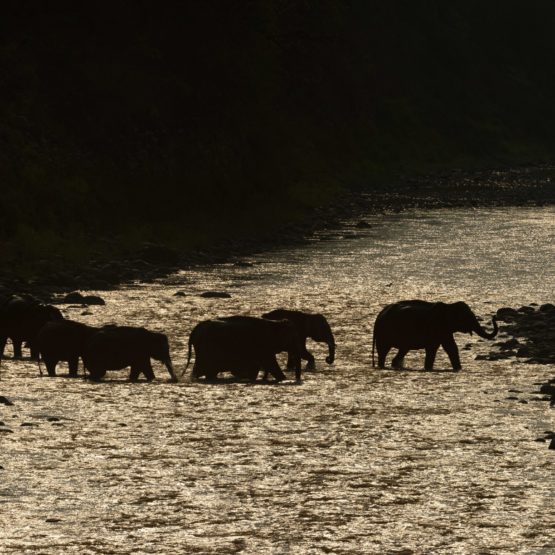 Jim Corbett National Park, officially Corbett Tiger Reserve—and popularly known purely as Corbett—is a fabulous wildlife destination in northern India. Corbett National Park is located near Ramnagar in the state of Uttarakhand. Nestled at the foothills of the mighty Himalayas, Corbett is a spectacular landscape, famous for Bengal Tiger and Asian Elephants.

The mountains and foothills harbour diverse avifauna, such as Ibisbill, Lesser Fish Eagle, Tawny Fish Owl, Great Slaty Woodpecker, Wallcreeper and Himalayan Rubythroat, and attract flocks of birdwatchers from around the globe every year. At least 512 bird species, including migrants and residents, have been reliably recorded (as per eBird) in and around Corbett. 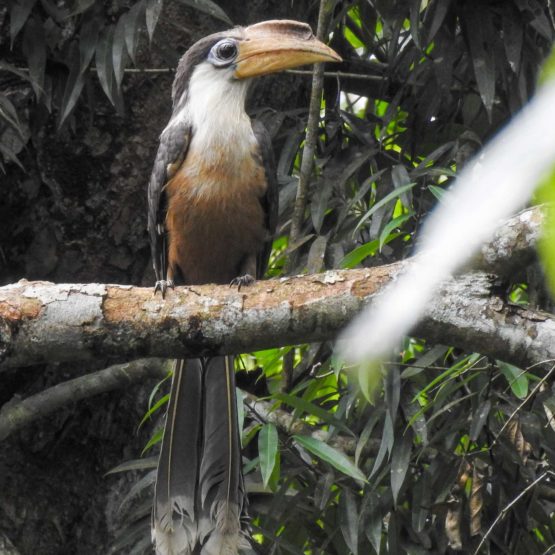 Austen’s Brown Hornbill is one of the rarest hornbills in India, only regularly seen at Namdapha National Park, Arunachal Pradesh and Dehing Patkai Wildlife Sanctuary in Assam.

It is a “cooperative” breeding hornbill, with the female taken care of my its mate and his “helpers”. Habitat destruction and fragmentation, plus hunting, have had a significant impact on the population. Thankfully there are some positive signs: read on for more about the status, identification and behaviour of Brown Hornbills, and where to see them in India 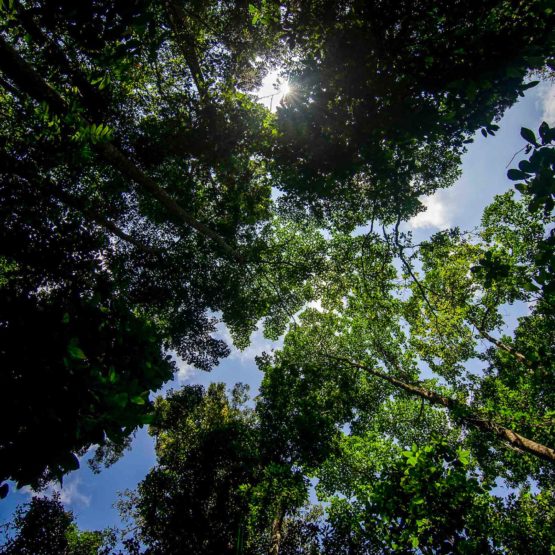 Huge hunting parties of birds are a feature, with some of the speciality birds including Greater Necklaced Laughingthrush, Red-headed Trogon, Oriental Bay Owl and the rare Austen’s Brown Hornbill.

Read our guide to the habitat, the birds, the animals (seven species of cats!), and all about visiting Dehing Patkai. 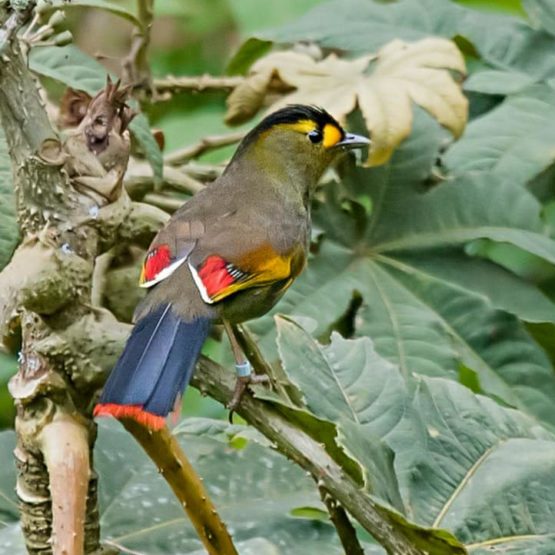 Bugun Liocichla is one of the rarest birds in the world, with only about 14 birds living in a 2 sq km area near Lama Camp in Eaglenest Wildlife Sanctuary, Arunachal Pradesh.

Read about the discovery of the bird, described as new to science in 2006, and see photos and videos. Most importantly, tips for visiting Eaglenest and being able to see it for yourself! 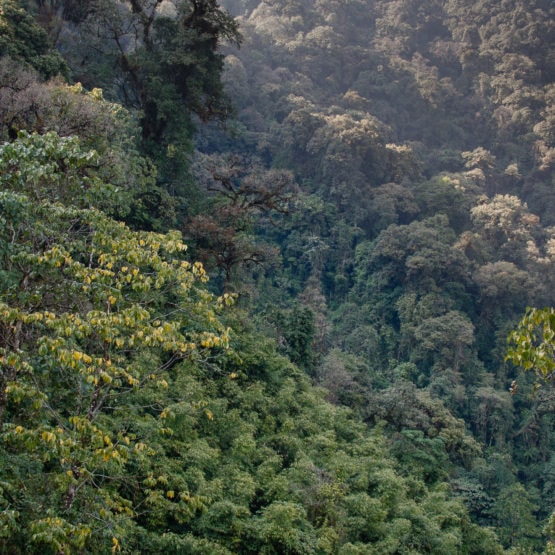 Eaglenest Wildlife Sanctuary in Arunachal Pradesh is arguably the most important birding site in the Eastern Himalayas of India.

The forest supports about 500 species and is the only place in the world to see the recently discovered Bugun Liocichla.

After reading this invaluable guide to the birding locations at Eaglenest, and seeing some of the birds present there, we guarantee you’ll be planning your trip very soon! 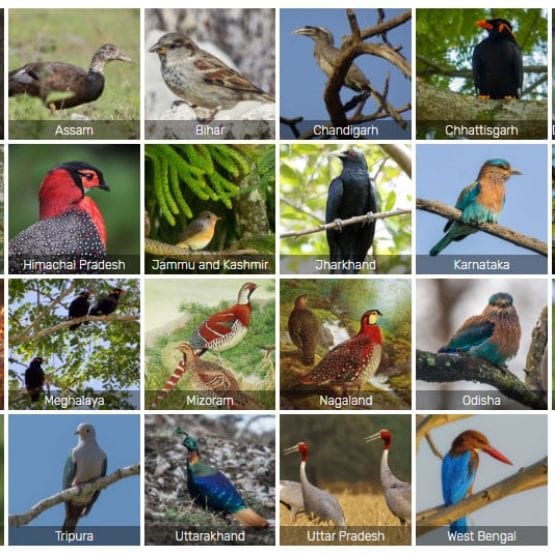 Checklists of the Birds of India by State

Checklists of the birds of India, for each individual state. These are the most accurate bird checklists available, based on actual verified sightings from eBird.

Each checklist gives relative abundance, or an assessment of how likely you are to see each species at any time of year.